The Deep Movement of Autumn 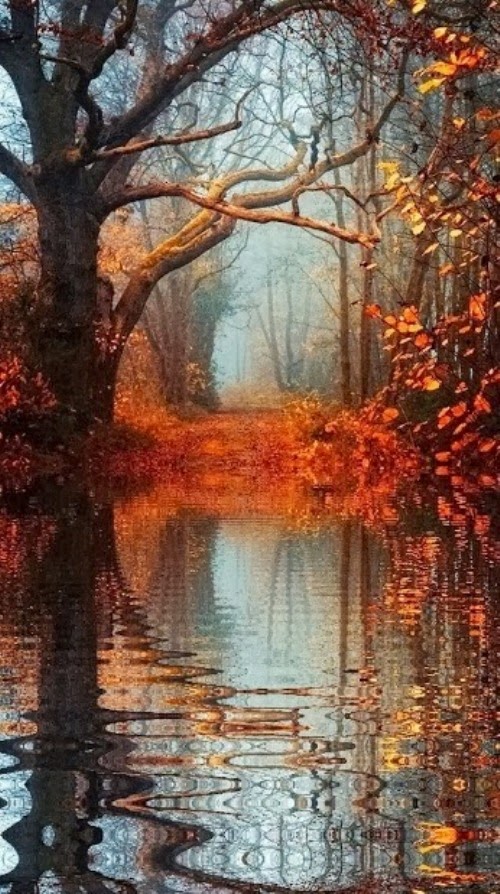 It's been awhile since I've written here, almost a year and half.  In all honesty, I can't really say why I stopped.  Nor can I say why I've kept this blog alive, dangling here in the internet air.  Oh, there were times I considered deleting it - perhaps starting over with a freshly created blog site - but something in me said, "No.  Keep this one."  So I shrugged my shoulders, and without any inclination to write more here, I let it sit.

In the past week, I've re-read some of my published posts, and even my unpublished drafts - things I said, and things I just couldn't bring myself to say publicly at the time.  The contrast between the two actually speaks volumes to me, and sheds a light on what was transpiring within me.  There was something within me aching to be born, to be expressed, held out to be revealed in the light of day, and like a tender babe just making its entrance into the world, it was I who needed to be the first one to see and to embrace it.

Oh, it's not like I haven't been writing.  I've been hanging out and doing some writing on Facebook.  I do know I needed to make friendly relations with the whole social networking thing.  Now I see that I was also, partly, testing the waters - putting myself out there, expressing my ideas, my ways, to see how those things in me were received by others in a more...immediate, or direct form of communication.  The reception has been a bit mixed, which doesn't surprise me.  People are nothing if not predictable, and in some ways, I suppose, that's reassuring.  So in the past year or so, I've watched as people come and go from my friends list, watching and waiting for things to unfold as they would.  My friends list is relatively short, which I like and prefer because I'd rather keep things on a somewhat more intimate level.  For me, keeping things small and simple helps me stay more grounded and real.  I felt...that too many people would be too much like an audience - impersonal.  One that brings with it a temptation (for me) to perform, which naturally creates a kind of image or persona that a person eventually feels they must uphold.  Me?  I've always felt that kind of thing is a trap for my soul's full expression.   I don't want to feel *stuck* within a certain image.  I don't want to have to maintain it to keep my audience.  I find it too much work, and rather limiting.

So, along the way in my adventures on Facebook, I've encountered folks for whom I am truly thankful exist in this world.  I now recognize fully that I was in great need of being aware of their living and being in this world.  Being aware of their existence has bolstered my confidence greatly, because I now know there are those whose ways of being and perceiving the world are much like my own.  I am not as alone in this world of humans as I originally thought, and quite frankly, that feels awesome.  I now have a rather eclectic group of fantastic human beings on my list, and ever so slowly, I've watched the connection I have with some of these people take shape and form, and to also wing its way out to connect others who weren't aware of each other until they came together from our connection.  Frankly, it's been an astounding thing to witness, this network of connections being made, and how it's impacted folks for the good, and to know that with a few of these people, I am the bridge that connected them.

Which brings me back to the subject of this blog of mine...

In the past, I often asked myself while writing on this blog, "Who am I talking to?"  I honestly didn't know half the time.  There were times I felt as if I was talking to an impersonal sky.  Was that big sky listening?  Did it give a shit what I had to say?  Other times, I spoke directly to a person unseen by any readers who happened along.  And then other times I spoke to many who had fixed themselves to a belief system, (*any* organized religion), trying to speak their language to somehow break through their unopened minds.  Because it is certain I was having my fill of their ways, and being negatively impacted personally by their extremely limited and set beliefs.  But mostly, I talked to that Big Sky.

So in considering what to do with this blog, I periodically asked myself, "What if folks read what I've written here and judge me on the basis of one or two posts that just happen to talk about God or have some reference to the bible?  Like I said, people are nothing if not predictable.  And the very moment someone says or writes the word "God," it evokes in too many the slamming of the door to relationship.  There would be no questioning, no understanding that I was, during those times, dealing with, and trying to find some reconciliation and/or understanding within *myself* with this christian line of thought and belief because of the people in my life who were impacting me and mine to a great degree.  The very same practice of slamming the door to relationship can be said of those who are Pagan, or into more occult religions.

Within the encounters I've had with others on Facebook I am acutely aware of that dividing line.  When I post things from my Pagan or occult friends, my more christian inclined friends don't "like" them.  Hell, they won't even give it a second glance, much less actually read what the other wrote!  The same thing happens with my occult friends when I post something along the line of thought that might be misinterpreted as stemming from a more christian belief system...namely, anything having to do with *Love.*  One is viewed as dark, shadowy, or evil, and the other is viewed as light, shiny, and good, no matter which way you flip it.  There has always existed in humans that division, that duality between what folks consider good and evil, and here I am again, walking the line that is perceived by others as being between light and dark, with folks trying to figure out where I stand - where to place me so I make some sort of sense to them within their own divided framework of belief.  I can no more be categorized, or filed into a nice neat box with a pretty bow than Nature can.  That is to say, other than saying I am a female human being.

I see no such thing as a dividing line of light and dark.  I don't even think in those terms, and for those who do, it can be rather mind boggling to them, I suppose, to try to comprehend and accept that yes, there is another way of viewing the world and each other besides in black and white, and either/or.  It is in my thinking that therein lies the very issue - with the *two* needing to be brought together.  For the most part, folks believe in separation.  There is no separation, and this Earth and Sky aren't divided.  And neither are we.  Only in our beliefs do such things take shape and form through us.

There is no separation.

So in considering what to do with this blog, I decided to keep it just the way it is, with posts written in the past remaining, and let people think what they will of me.  If one word written here of mine has people judging me on such a surface basis, turning themselves away from me, well, so be it.  I cannot control, and don't even want to try to control, the way others see see me.

I've changed in the course of this past year and a half.  Some of the things I wrote here in the last few years, I see now as a developmental process to help me arrive *here* with who I am today in this moment.  And I give myself chances, room, space to develop, to express what and who I am in any given moment.  Life is fluid, and imperfect.  I seek no perfection.  I don't believe in endings.  Just a continuous process of change, and metamorphosis.  Like the changing Seasons, or the Earth and Sky, never expressing themselves - ever - in the same way twice, although we can always depend on their continued Presence.

The Seasons change, one into the other, oh so subtly, ever evolving, morphing in some new way.  Not *evolving* as in "more" or "better," but evolving into some new means of expression.  And I find the same thing can be said for each of us.  Past Seasons aren't forgotten, but begin to fall like the leaves of trees, or like the gentle rain drops that have their season of weeping from the sky, to be gently embraced by the Earth, and eventually absorbed into the wholeness of being during the dark of Winter, only to be reborn and expressed in another way or form in the Spring, and then anchors it all in Summer through our living and experiencing it - through our dancing.  Again, in Autumn we begin to reflect back, sensing the movement to let go and say goodbye to that last cycle of seasons, embracing it all, and then burying it into a loving, living memory.  All of it, past and present...all the seasons of our lives, still live while we walk.  Wherever we walk and have our being, it all morphed out of past seasons.

So this...this blog of mine represents several past cycles of seasons.  Seasons that I embrace.  Seasons that I am forever grateful for experiencing, and I carry them lovingly into this Autumn, letting them fall to be absorbed into the ground of my very being... and in me they will always live, for from them I learned, and from them I evolved into what you see today.

Another Place I Fly